Adapted from The Joy of Cooking 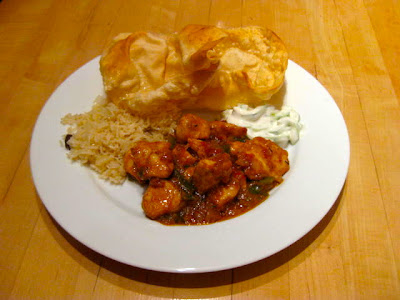 One day when I was in high school, out of the blue I got a craving for curry. I had no idea how that popped into my head. I had never eaten a curry in my life - not authentic Indian or Anglo-Indian. I'm sure there wasn't even a jar of curry powder, let alone the spices necessary to make it from scratch, in my mother's kitchen. At the time I was reading a book about Bridey Murphy, and for a split-second I thought maybe I was the incarnation of a previous lifetime lived in India. But as I was in an all-girl's Catholic school, that possibility seemed remote. 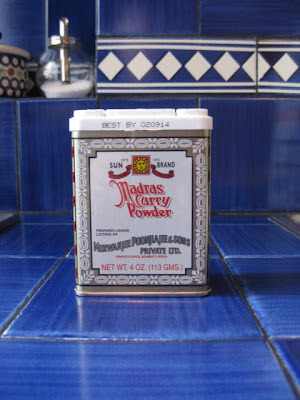 When the father of a friend of mine took eight girls from my class to Toots Schor to celebrate our graduation, shrimp curry was on the menu, and I ordered it. Then, when Frannie and I got stuck at Kennedy Airport because our flight to London was delayed by twelve hours, we went to the fanciest restaurant there, The Golden Key, and, again, I had shrimp curry. Finally, in London, Frannie and I happened upon an Indian restaurant where we stopped for dinner. That was it. I was hooked.
Forever.
I love all kinds of Indian food - authentic or not. 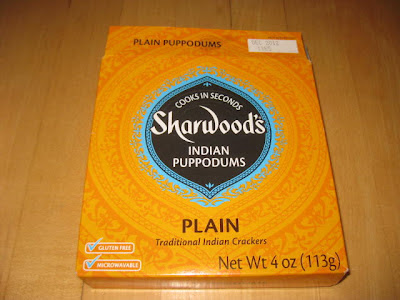 When I first started this blog, I didn't take photos of the food, so whenever I make a recipe for which there is no picture, I try to remember to take one and go back and post it, and that is what I did when I made this last week. Even though I have previously written about it, this dish is so good that it deserves a revisit.
For over thirty years I've been making an adaptation of the version of Chicken Country Captain from my first cookbook, the 1964 Joy of Cooking. There's something of a debate over whether or not the original is an authentic Indian dish or not.
This dish has become a favorite in America, although it probably got its name not from the sea-captain who brought the recipe back to our shores, but from the Indian officer who first made him acquainted with it. So says Cecily Brownstone, a great friend; and this is her time-tested formula. (emphasis added) The Joy of Cooking, 1964
Writing in The New York Times on April 17, 1991, Molly O'Neill called Ms. Brownstone, the "Curator of Country Captain Chicken," because Ms. Brownstone said that "For years, every variation upset me."
And mine would be no exception. 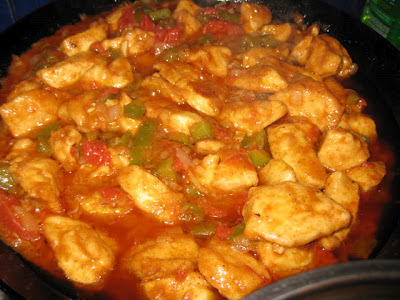 Country CaptainAdapted from The Joy of Cooking, 1964 Edition

Preheat the oven to 350 degrees. Cut the chicken into bite-size pieces using kitchen shears. Coat the chicken pieces with seasoned flour, and put on a plate as you go along.

Add the diced onion to the saute pan, and cook until the onion wilts and just starts to turn pale gold. Add the diced green pepper, and cook for about 2 minutes. Add the garlic, and cook for 30 seconds. Add the curry powder, and cook for about 1 minute to lose the raw taste and allow the flavor to "bloom."  Add the stewed tomatoes and thyme. Stir the contents of the pan to deglaze. Bring just to a boil, then turn the heat down. You can add a little salt, but be sparing and taste carefully because the chicken is coated with seasoned flour.

If the sauté pan is big enough to hold the sauce and the chicken and can fit into the oven, put the chicken back in the pan, and put it in the oven.  Otherwise put everything in another pan or casserole, and put that in the oven.

Bake uncovered for about 30 minutes. Add currants or raisins for the last 5 minutes of cooking. Sprinkle toasted slivered almonds over the top before serving. 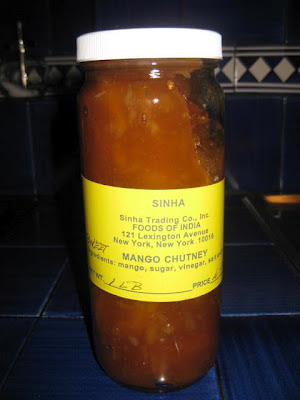 I serve this with Basmati Rice Pilaf, mango chutney, and pappadams, which I have cooked in hot oil until they puff up. 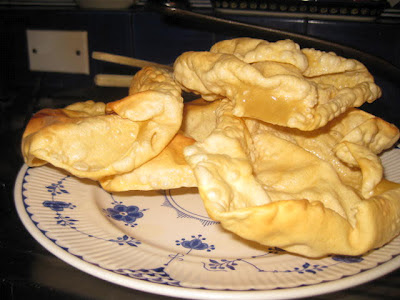